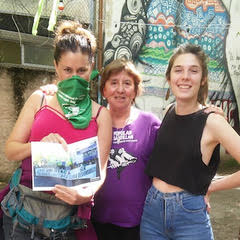 Outside Buenos Aires, Argentina, with Ni Una Mas activists (Not One More woman murdered) after their weekly organizing meeting. 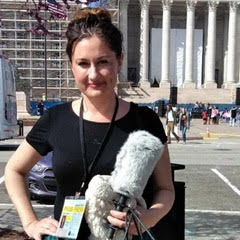 Exhausted after a long but inspiring day interviewing striking teachers protesting at the Oklahoma state capitol. 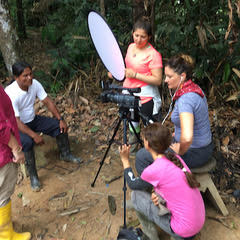 Achuar territory in Ecuador's rainforest via a 5-hour bus drive, 1-hour bush plane ride, 2-hour hike, and 2-hour boat ride from the airport in Quito. Translating from Achuar to Spanish to English!

Katie Curran, 43, wrote, directed and produced the award-winning documentary feature film about food justice, Greening the Revolution, which screened at film festivals, music festivals, independent theaters, universities and community centers around the world. She is directing another feature, IGNITE, a documentary about the roots causes of sexual assault, now on hiatus due to Covid-19. Curran is currently working on a collection of interviews for a book about the politics of mental health justice. She lives with her partner and fur babies in New Mexico.

For Greening the Revolution, Curran conducted 80 interviews and backpacked through seven countries to film exclusive interviews with farmers and revolutionaries, world-renowned intellectuals, such as Noam Chomsky, Howard Zinn and Vandana Shiva, government officials, like the Director of the FDA and executives at Monsanto Co. Though she was held up at gunpoint once during production, and needed six kind bodyguards at another location, the most terrifying interview, by far, was at the Monsanto corporate offices in Washington, D.C. For IGNITE, Curran has been honored and humbled to hear the stories of survivors from around the world, including the tools and support they’re using to heal and the political organizing they’re engaged in to fight patriarchy and violence against women. Production for IGNITE is half-way complete.

Curran interned for the Investigative Team at ABC News in Chicago, has worked as camera, production assistant, assistant producer, writer or reporter for PBS, NOVA, NPR and independent print media and taught film for Haiti Reporters while living in Port-au-Prince. Curran holds a Masters in Sustainable Communities and has been a political and social activist for over 20 years. She produces documentaries to contribute to independent media by exposing injustices, showing existing alternatives and documenting the beauty and strength of the earth and humanity. Curran prefers to film with a very small crew, and with local talent and journalists when on location. She’d love to interview the whole world.